The Ritz cinema is located in Thirsk, Yorkshire. The cinema is one of the oldest continuous run cinemas in the United Kingdom, having first opened to the public in 1912.

Since 1995 the cinema has been run by a dedicated team of volunteers, the cinema aims to bring recent film releases to a rural town at affordable prices.

We hope you will enjoy your experiences at the Ritz and we look forward to welcoming you back soon. The cinema was originally built as a Mechanic’s Institute in the middle of the 19th Century; a place of learning for working people of the area and had a library and lecture facilities where people of different trades learnt from each other. This national network gradually disappeared towards the end of the century and in 1912 a local called Walter Power opened ‘The Picture House’ to show the latest silent movies; locally known as ‘Powers’. He was a popular personality and showman extraordinaire; he would often accompany the mood of the films himself on the piano. 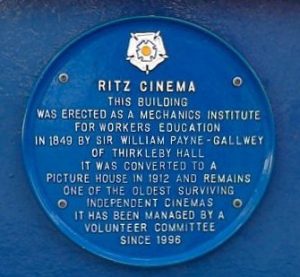 The original silent movie screen with the crest above it still exists behind our present screen. The ‘talkies’ arrived in 1927 and the cinema capacity was increased to accommodate the ensuing larger audiences by fitting a balcony area. It was at this time that the name was also changed to ‘The Ritz’.

Walter Power died in 1934, aged 47, and the cinema was operated by his wife and daughter until 1938 when they sold out to the Schofield Brothers from Leeds. It was managed for them by a man called Mr Buck. From the late 1920’s to the 1950’s the cinema was in its heyday. The Gaiety cinema opened in Long Street but was mysteriously burnt down in 1930. The building is now a tyre depot. 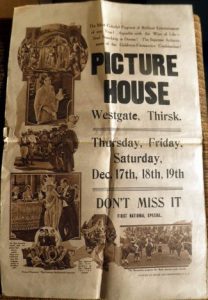 A rival cinema called the Regent Cinema opened at the opposite end of Castlegate from The Ritz in 1935. With the influx of aircrew to the area during the Second World War (3 airfields within a 4 mile radius) the Ritz and Regent did a very good trade, with two showings a day and ticket prices ranging from 9d to 2s3d for the balcony. In 1953 The Ritz was bought by a larger cinema company called the Star Group who ran almost 100 cinemas across the country. Peter Barr, one of our present projectionists, started work at the cinema as an apprentice in 1951 and worked for them under the management of Mr Kidd until 1962. During this period the name was changed to Studio One and bingo sessions were introduced to boost falling profits with the advent of television.

By the early 1970’s Thirsk had lost both its cinemas with The Regent converting to a full time bingo hall. The Regent finally closed in 2005 and was demolished in 2006, all except the west wall which was included in the new building. In 1974 however another local cinema enthusiast, Ken Cartman, decided on a venture which would eventually lead to the return of the big screen to Thirsk. He leased the dilapidated Town Hall next door, equipped and decorated it and opened up as the Central Cinema. However, after initial success, audiences dwindled and the cinema was lost to Thirsk again. Ken did not give up and in 1981, with the help of Geoff Rose, Studio One reopened at the Ritz. In 1983 Peter Barr took over from Ken and, together with his wife, ran the cinema until 1993 when the business was sold to Mr Twiggs. By the end of 1994 it was closed again, but not for long. A public meeting in February 1995 with 100 attendees supported a plan to open the cinema under Town Council control with volunteer assistance. The enthusiasm of members of Thirsk Town Council, the help of the many able volunteers and the continued support of Peter, Ken and Geoff meant that the cinema reopened on 4th March 1995. Queues formed down the street for showings of ‘The Lion King’ and our friendly, local community cinema ‘The Ritz’ was reborn. A six month lease was taken out, and the screening of 31 films resulted in a small profit.

After an initial partnership period of 12 months, control was passed into the hands of the Volunteer Management Committee. With the determination of the volunteers and the support of the local community we have managed to carry out many improvements including the installation of a new screen, better seating, Dolby SR surround sound and improved decor. In 2012 The Ritz converted to digital cinema.

The Ritz is constantly looking forward and is proud to continue the tradition of cinema in Hambleton and North Yorkshire. The Ritz today combines the period feel of Mr Power’s ‘Picture House’ with the modern comfort and facilities that audiences now expect.